What Does it Mean When You are Charged with Counterfeiting and Forgery in California?

In a case of counterfeiting and forgery, as with nearly every case, the offense is viewed first, along with surrounding circumstances. For example, when you counterfeit money in any shape or form, you are committing a federal crime because you are dealing with the Treasury Department, and penalties can be quite severe.

Examples of forgery include signing a person’s name (not your own) on a legal document, such as a will, checks, official government documents, wills, letters of intent, and more. If you use another person’s name on a document, then it will be up to the prosecutor to show that you had an intent to defraud your victim for financial or personal gain in some way. 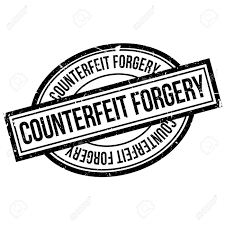 When a person is convicted of forgery at its lowest level, the penalty is up to one year in a county jail. For felony convictions, the term of imprisonment is, at the least, 16 months and up to four years, at the most.

Brenda Finley (not her real name) was helping her manager, Joan, with plans for the store’s upcoming Christmas party for the employees. She helped Joan with the shopping list for drinks and the paper plates, plastic cups, plastic utensils, and napkins, along with candy that would be put in small stockings for employees’ children attending the party.

Joan needed to stay at the store to mitigate a small crisis, so she gave Brenda her corporate credit card and told her to do the shopping for the list items and to sign Joan’s name on the receipt. She just needed to get the receipt back for her records.

Brenda did what she was told and returned the receipt to Joan. Two months later, she and Joan were called into the store manager’s office and it turned out that it was illegal for Brenda to sign Joan’s name on the corporate credit card receipt. Brenda was in trouble with the corporate office for forging her manager’s name on the card.

It was a simple innocent act that is repeated often in companies throughout the country, yet Brenda felt betrayed by her company, that they thought she had committed some type of forgery. On her next break, she called a criminal defense attorney to find out what kind of trouble she could be in.

The Elderly are Easy Victims

Always watch out for your elderly family members, as they are easy targets for those who want to commit fraud to gain from unsuspecting targets. This includes emails coming from false sources, which you can always tell by the address that they are from a different web source. Many of these offer opportunities to work from home, or how to invest in the latest funds that no one has ever heard of. Keep tabs on what they are doing as often as you can.

If you have been charged with counterfeiting or forgery, call us at once for a consultation. (619) 234-2300